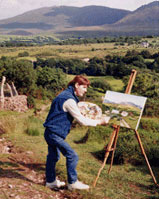 The artist in the mountains of Killarney. Click Here to find out more about Mary McSweeney and her inspirations.
Home > About Mary

Mary McSweeney received her formal art training at the Cork College of Art and Design where she studied fine art and graphics. A native of Killarney, Co. Kerry, Ireland. she began her professional career as an Artist when she opened her first studio in Tralee in 1979. Mary has exhibited at the Siamsa Tire Gallery in Tralee, the Irish American Heritage Gallery in Chicago, the University of Notre Dame in Indiana, the Irish American Heritage Museum Gallery in NY, the Paul VI Institute for the Arts in DC, the Chicago Dramatists Workshop Gallery, the Garden State Art Center in NJ, the Aisling Gallery in Hingham, MA, the Spring & Bull Gallery in Newport, RI, the Guyer Barn Gallery in Hyannis, and many others.

Her portrayal of the Irish people at work and at play evokes the same memorable nostalgia that made Norman Rockwell's heartwarming scenes of life in America so popular. Mary does for the Irish what Norman Rockwell did for 1950's America. 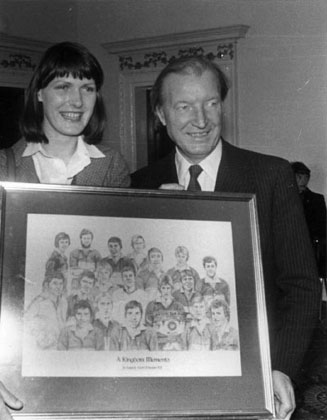 The award winning artist's work is highly sought after by Irish and Irish-American companies. Her paintings are acknowledged on both sides of the Atlantic as being authentically "Irish to the core". Her many successful exhibitions, patrons and commissions bear testimony to her carefully honed talents and deep affection for her native country and all it represents. 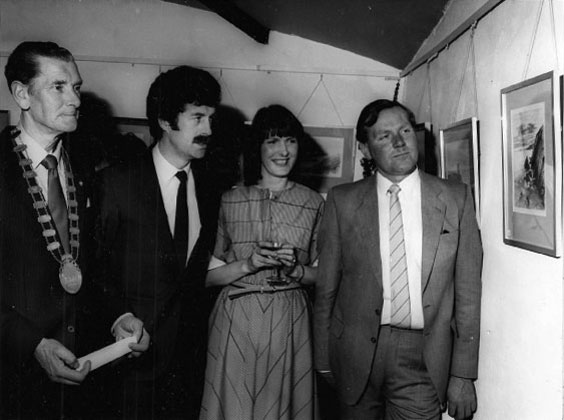 "The art of Mary McSweeney holds up a clear mirror to the people and places of our ancient land, touching a deep, ancestral memory and fostering a sense of familiarity and belonging."
Frank Sheridan, Consul General of Ireland, Chicago, IL

"My grandmother told me her last glimpse of Ireland when she sailed for America in the 1870's was The Fastnet. Every time I look at your magnificent print I think of the fear and expectation she told me she felt all those years ago."
Darlene McGrath, Brampton, Ontario

"The Hearth brought to life an image of Ireland that I have heard so much about from my parents... the open fire, the soda bread, even the picture of the Sacred Heart."
Mrs. Ann Figlia, Manhattan, NY